Black pearls are expensive, exotic, and mysterious. While it is possible to dye pearls black, it takes extremely rare conditions to form gems that have a dark glow naturally. This is exactly why they are so sought after.

In the past, only the rich were able to buy black pearls. Although they are still rare, the landscape has changed, and black pearls are now farmed, making them more available at a more affordable price.

However, when compared to its white pearls, natural black pearls are much more expensive. What makes them so unique, precious and mysterious? Here are all the answers you need.

The first thing you need to know about black pearls is that Black Tahitian Pearls (also known as Black South Sea pearls) are the only natural pearls. Besides them, there are two other types of black pearls that are treated: Black Akoya Pearls and Black Freshwater Pearls.

The Tuamotu Archipelago and the Gambier Islands are two archipelagos that are responsible for most of the pearl production. 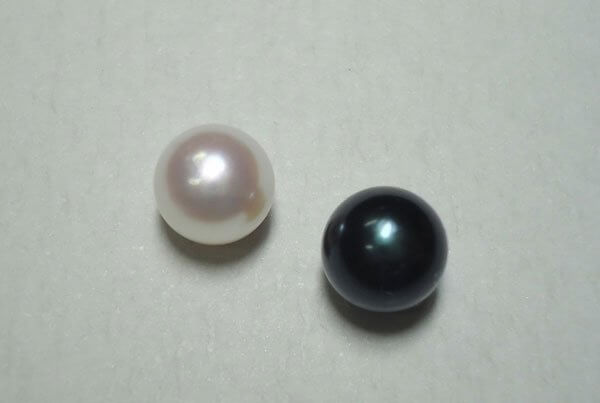 Natural black pearls (or the ones that are not grown under controlled conditions in pearl farms) are created just like any other pearl. It all begins with an irritant, such as a grain of sand, getting stuck in the oyster’s body.

The oyster tries to ease its discomfort by coating it in calcium carbonate, which then hardens and eventually becomes a pearl. It’s important to note that the pearl is made up of the same shiny substance that the inside of the oyster’s shell, also known as nacre, is lined with.

It’s also possible that an oyster that typically produces white pearls, can have an unusual black coloring in its nacre, and it therefore creates a blackish pearl. However, this is very rare and occurs in one in 10,000 pearls.

As for farmed black pearls, they are formed when a small bead is surgically inserted into the pearl sac. During its growth period, hundreds of layers of nacre are produced to cover the beads and finally form the pearl.

When the nacre that envelops the bead is thick enough, the pearl farmer opens the oyster and removes the black pearl.

While some pearls are natural to be black, there are others that are dyed. There are several ways to spot a dyed pearl. First, the color of a dyed pearl looks too perfect to be natural. And speaking of natural, the only real, black pearls (Tahitian pearls) are approximately 8 mm in size. That said, it’s safe to assume that black pearls that are under 8 mm are probably dyed.

For example, Black Freshwater Pearls from China are dyed pearls. They are grown in man-made lakes, ponds, and rivers. The process of dying black pearls usually takes a few days to complete. First, the pearls are half or fully drilled. Then they are soaked in the black dye solution until it goes into all the nacre layers. The final color depends on the type of dye, and it can range from colorful to solid black colors. 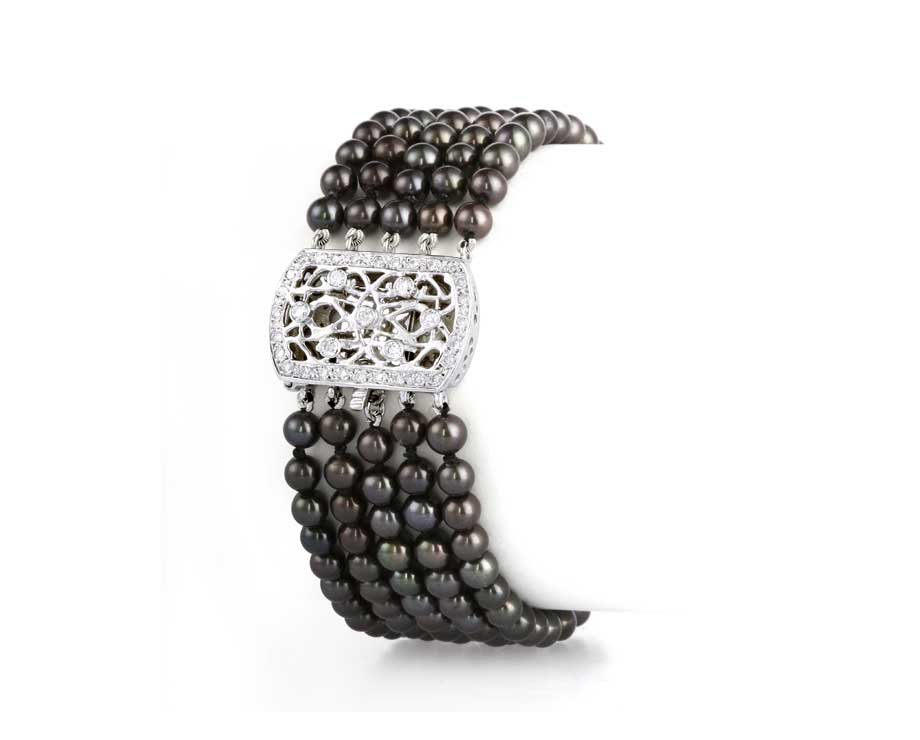 The materials inside the oyster’s shell are the ones it uses to produce a pearl. The nacre (or the inside of the black-lipped oyster) features a thick band of black, but also, other colors, such as rich greens, blues, and purples. When the pearl is formed near the band, black pearl comes into existence.

While only black-lipped Pinctada margaritifera oysters are capable of producing black pearls thanks to their array of colors on their lips, black pearls produce a wide range of colors, including blue, green, and purple.

Dyed black pearls also have a wide range of colors; from shades of plum, green, blue to gray, all depending on the tissue that is being used. Technicians insert a small square of donor mantle tissue with a mother of pearl shell bed when farming a Tahitian pearl. Black Tahitian pearls also often have strong overtones of red, aubergine, green and peacock. 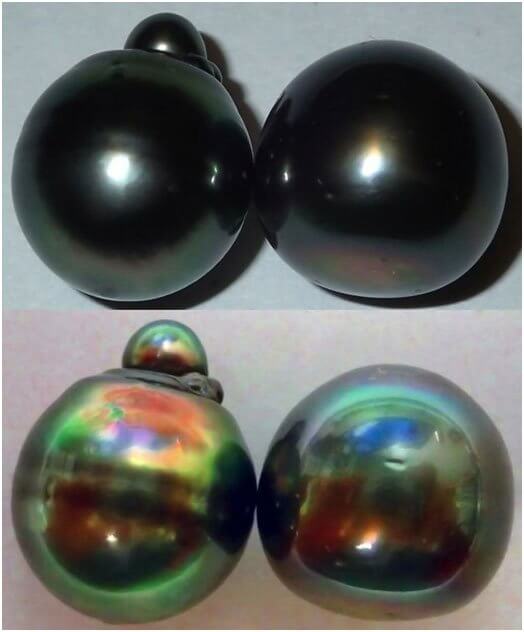 While round pearls are the most popular, and therefore, the most expensive, pearls are rarely perfectly round. Tahitian black pearls come in five different shapes: circular or semicircular, oval or button-shaped, drop-shaped, circle-shaped, semi-baroque or baroque.

The more perfect the surface of a black pearl, the higher the value it has. However, the surface of pearls often has little bumps, wrinkles, and spots.

History and Legends Behind Black Pearls

Once upon a time, black pearls were not as valuable as they are today. The first mention of black pearls history writings was in 1850 when 8 grains of perfectly round black pearl gems were sold for $500. According to some sources, it was Empress Eugenie of France, the wife of Napoleon III, who bought them.

Before that, the demand had always been high for white and yellow pearls. It wasn’t until Empress Eugenie started wearing them that they became fashionable in Europe. As it appears from Winterhalter’s portrait of the queen, who was at the height of her power, she wore them as a part of her fabulous necklace. After the fall of Napoleon III, the necklace was sold at Christie’s for $20,000. 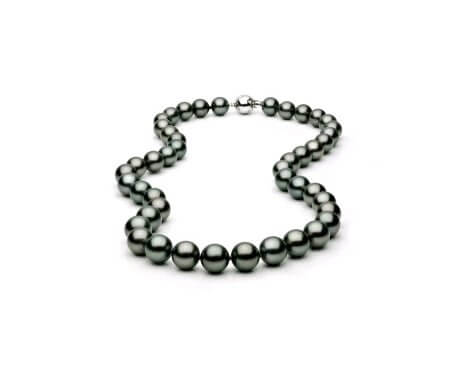 There is another interesting story that involves black pearls. Back in the 19th century, Hungarian premier, Count Louis Batthyany, had a mesmerizing black pearl on his scarf pin.

The Count was sanctioned and executed in 1849. Before the execution, he gave the pearl to his valet, who then gave it to his son. When the valet’s son tried to sell it, the authorities in Budapest heard about it and started an investigation.

What they discovered was shocking; the pearl had been stolen 150 years ago from the English crown. It still remains a mystery how the black pearl gem ended up on the Count’s scarf.

There are also many myths and legends around black pearls. One of them involves Oro, the Polynesian god of peace and fertility, who visited the earth on a rainbow and gave a black pearl to Princess Bora Bora. This black gem was a symbol of his love. Even today, some people believe that buying someone black pearl jewelry represents eternal love.

According to a Chinese legend, a natural black pearl is a symbol of infinite wisdom. Pearls were formed in the heads of dragons, which the Chinese perceived as wise. The dragons carried black pearls between their teeth until their death.

And according to a Ceylon legend, Adam and Eve shed tears which then created a lake of pearls. The white pearls were formed by the tears of Eve, while the black pearls came from Adam. And because men cry less than women, that explains why black pearls are so rare.

Product categories
Filter by price
Recent Reviews
Chelsea – Luling, TX

Read More
I used Pearl & Clasp for my bridal jewelry & they were absolutely amazing to work with! Tara contacted me over the phone once I inquired (since I live in Texas) and asked me about my likes, dislikes, and budget. She also had me send a photo of my dress so we could come up with a piece to compliment my dress perfectly! Once I got her all the information, she came up with multiple options for me to choose from and I chose an elegant tear drop pearl necklace that goes with the neckline & details of my dress. I couldn't be more happy with my jewelry! Pearl & Clasp has excellent customer service & exquisite jewelry. Thank you for making my wedding day a very special one!
Elie – West Hempstead, NY

Read More
I love my necklace! Its exactly what I wanted! Your customer service was great! Thanx so much
Dalitta – Upper Malbaro, MD

Read More
Just wanted to let you know that I received my pearls last Friday and am so pleased with them and happy. I am thrilled to find a place that will do this so efficiently and made it so convenient for me. Can't say enough about your service. Would definitely use you again. THANKS AGAIN !
Mordechai – New York, NY

Read More
After the birth of our son, I wanted to treat my wife to some jewelry that matched her personality- classy with a flair of modern. This necklace is perfect! Thanks to the patience and guidance of customer service agent, my wife loved it! I'm sure she'll cherish it almost as much as she cherishes our newest addition
Elisheva – New York, NY

Read More
I love these earrings! I bought these as a gift for my niece. The quality and color are beautiful and the process was so easy- no more dragging myself to the jewelry store! I highly recommend Pearl & Clasp!
Maeve – New York, NY

Read More
Pearl and Clasp" came up when I googled to get "Pearls restringing" and I'm so glad it did! I emailed late on a Sunday night and got a reply from Tara instantly giving me information on location/price estimate. I dropped them in during my lunch hour. Then next day at lunchtime I got a call saying they were ready. I picked them up and they were perfect. Such a reasonable price and such a great service! I would highly recommend. 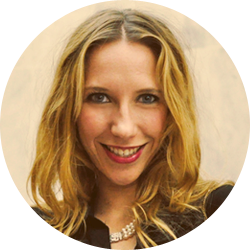 Daina – Livnia, Michigan

Read More
I love my clasp's art deco look and that it fits 3 strands of pearls but what i love most of all is how much I can wear it! I can easily dress it down or up. My favorite way to wear it is with a white t-shirt and then layer a denim top over it or for a dressy look a gold sequin skirt with simple black top. This is a versatile clasp that looks classic and never dated and is so easy to integrate in to your style. I love the feel of the closure and how it snaps shut and the feeling of confidence a high quality piece of jewelry feels (and looks) next to my skin. I get compliments on it every time I wear it.
Prasun – Detriot, MI

Read More
I have a 3 string pearl necklace. One of the strings was broken. I also have a pair of gold earrings. The stem of one of them was broken. I contacted Pearls & Clasp to see if they could repair both of these items. Upon discussion the price seemed to be quite reasonable. I mailed the items to them and they called back within the week to let me know the order was complete and ready to go. It was a complex job and I am very happy the way they came through with the repair. Keep up the good work. 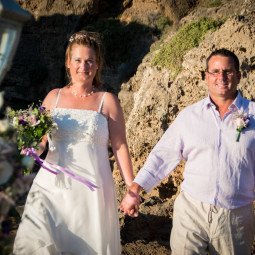 Kristin – US Armed Forces – Europe

Read More
I received my necklace and tried it on with my dress. It is perfect! Exactly what I wanted for my wedding day.Thanks again for your help in making me a beautiful necklace!
Previous
Next