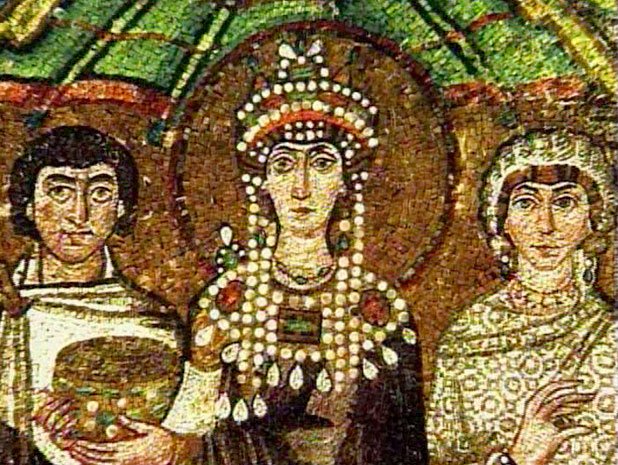 Chances are you have a picture of your mother wearing her pearl necklace at a wedding or girls’ lunch. You likely also have a similar picture of your grandmother. If you’re really lucky, you might even have a sepia print of your great-grandmother in a posed family photo with her white strands. How far back does it go? How long have we been wearing the lustrous little white gems?

In Middle East and Asian societies, pearls were worn as jewelry in 3500 B.C. There are Chinese records showing that as far back as 2300 B.C., pearls were treasured by Chinese royalty, as gifts and possessions. A book from the 23rd-century B.C., the Shu King, notes that a king, not quite of the same status as the Chinese emperor, sent “strings of pearls not quite round.”

In 1908, George Frederick Kunz wrote his compendium, The Book of the Pearl, where he writes of his theory that coastal fish-eating tribes in India or perhaps an Asiatic river, probably discovered the pearl while digging for mollusks for food. Attracted by their luster, sheen and beauty, they likely were among the first to appreciate the pearl and use it for decoration.

India’s reverence for the pearl can be found in its sacred books and legends, which are full of references to the beauty of the pearl. There is the tale of the Hindu god Krishna, who discovered pearls when he drew one from the sea and gave it to his daughter Pandaïa as a wedding gift on the day she was to be married. Another old Indian myth tells of the offerings made by the elements as gifts worthy of a god: air offered a rainbow, fire a meteor, earth a ruby, and the sea a pearl. The rainbow created a halo around the god, the meteor functioned as a lamp, the ruby decorated the forehead and the pearl was worn upon the heart.

While the use of actual pearls doesn’t make an appearance until later, in Egypt, there is evidence that mother-of-pearl was used as decoration as far back as 4200 B.C. Pearls themselves came into popularity around 600 B.C. There are theories that the Egyptian conquest of Persia introduced Egyptian culture to the appeal of the pearl. The Romans fell under the spell of the pearl even later, which will be covered in another post. 4000 years of the history of the pearl is a lot to cover!