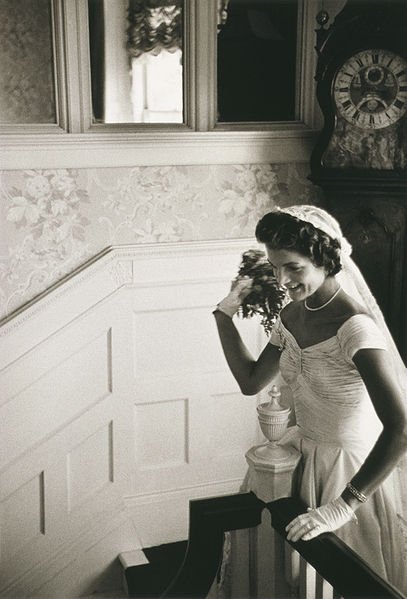 Wedding fashion is an ever-changing world. At the moment, strapless is in. In fact, it’s nearly impossible to find a dress with sleeves. Remember the huge, leg o’ mutton sleeves that were all the rage in the ‘80s? No? That’s okay, you really don’t want to remember those. Slim-fitting skirts, bell skirts with crinolines, dropped waist, corsets – it’s all come and gone, and sometimes come back again.

One style, however, that has persisted is the ballgown silhouette that Jacqueline Kennedy Onassis was married in, when she married John Kennedy. With a bouffant skirt, slightly off-the-shoulder cap sleeves, and portrait neckline, the simplicity of the dress allowed the ruffles on her full skirt to stand out. And the perfect final touch to Jackie’s dress? What else but a single strand of pearls.

Lace and sequins aren’t your only choice, if you want embellishment on your gown. Pearls have been a favorite, if only occasionally used, option for years. Princess Diana’s iconic gown was extravagant, as befits a princess, but the accents were surprisingly subtle. The bodice was studded with sequins and pearls in a beautiful apron panel on the front and back. The pearls and tiny mother-of-pearl sequins were hand embroidered on the silk taffeta.

Of course, there is always the possibility of going overboard on your embellishments, although it’s not likely you’ll go as over the top as Imperial Pearl Syndicate did in the 1950s. They were owners of a dress covered in 100,000 cultured pearls, that weighed about 27 pounds and cost $100,000. At the time, it was considered the most expensive gown, and was used mainly for fundraisers. It took 15 years to collect all the cultured pearls for the dress, and two months for eight dressmakers to complete the gown.

Modelled in this photo by actress Gloria Swanson, there were no expectations that this dress would become a wedding standard; not only would the weight make supporting this dress uncomfortable, the wearer would never be able to sit down on all those pearls!

On a more modern and realistic note, pearl accents can be seen scattered across a bodice, gracefully trailing down a train, sewn into a lace cap sleeve, or even, as Augusta Jones has used so beautifully, decorating a slim belt. You’re thinking, “A belt?” Go look at it; you’ll love it, too.

We’ve even seen pearls on tights or veils! Nothing is off limits for your wedding day. It’s your special day, let your pearl embellishments make you shine.