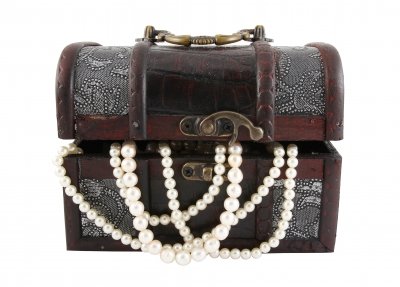 Where did the tradition of birthstones come from? Interestingly enough, it hails from the Bible. In the Book of Exodus, there is a description given of the breastplate for the High Priest, containing twelve stones. Roman historian Josephus made a connection between the twelve stones of the priestly breastplate, the twelve months of the year and the twelve signs of the zodiac. In Anglo-Saxon times, religious treaties were drawn referencing a particular stone with an apostle. A practice developed to own all twelve stones, and wear one a month. There is disagreement over when the modern custom of wearing only a single birthstone started, with the Gemological Institute of America placing the beginning in the 1560s in Germany, while mineralogist George F. Kunz claimed it was eighteenth century Poland.

Birthstones were thought to have magical qualities that would protect their wearer from illness or injury. Today’s birthstones bear little resemblance to the Biblical stones described on the breastplate, and most people wear their stones for decoration, not for otherworldly protection. Despite the loss of magic, wearing birthstones has remained a popular trend. The National Association of Jewelers, in an effort to standardize this trend in jewelry choice, convened in Kansas in 1912 and created an official list. The list has been updated a few times since then, by different councils, with the most recent change taking place in December 2002.

From the 15th – 20th centuries, most of the birthstones have remained the same, with each month having more than one stone associated with it. Interestingly, up until 1912, the pearl was one of February’s birthstones, along with amethyst and hyacinth. In 1912, the NAJ dropped the pearl and hyacinth from February’s list. Which became good news for the June babies. Pearl was also on the list for November birthdays up until 1912, along with topaz. It seems like throughout time, everyone has wanted pearls for their very own!

Diamond was April’s birthstone and has remained so, and despite the addition of pearl, November always had topaz. However, June’s birthstones in the 15th – 20th centuries bear no resemblance to the modern designation. If you were born in June, you could wear a choice of cat’s eye, turquoise or agate. All of which are lovely choices, of course, but nothing compares to pearls. June’s birthstone is unique in that it is the only organic stone. Pearls are considered “living gems” because they are derived from organic matter.

The twelve signs of the zodiac have also been assigned birthstones, however, none of those are pearl. The pearl has a magic all its own; who needs astrological properties? The days of the week have even been designated with birthstones. So if you were born in June, and on a Monday, you’re in luck. You get double the dose of pearls. Happy birthday to all our pearl birthstones readers!